Want to Support me?

What are Good Examples of Uncertainty Avoidance?

Since this is (or at least I think it is) one of the most difficult dimensions of Professor Geert Hofstede to explain, it makes sense to give some extra context and examples of Uncertainty Avoidance. If you’re not familiar with this uncertainty avoidance index at all, I strongly suggest you read this article first. It will give you a good overview of the breadth of this Hofstede cultural dimension.

If you’re just interested to see a wide range of examples of uncertainty avoidance, read on.

What is Uncertainty Avoidance and What Isn’t? 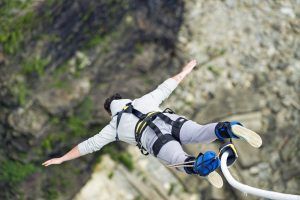 To understand what uncertainty avoidance index is what it isn’t let me use a question and a multiple choice answer.

The question: “Would people from countries that score low on this dimension be more likely to bungee jump?”

Starting your own business is not a calculated risk. Even if you create a business plan, as soon as you start with executing it, reality gets in the way and unpredictable things will happen.

I found that to best understand this Uncertainty Avoidance index it works to link real life examples (or phenomenon) to this dimensions in terms of correlations.

Below you see an image with an incomplete (!) list of correlations with Uncertainty Avoidance. I’ll explain them below the image. So in a culture that scores high on Uncertainty Avoidance (in the image uncertainty avoidance is abbreviated as AA which stands for Anxiety Avoidance; the vertical axis), people will do/show/consume/etc. more of the points listed. 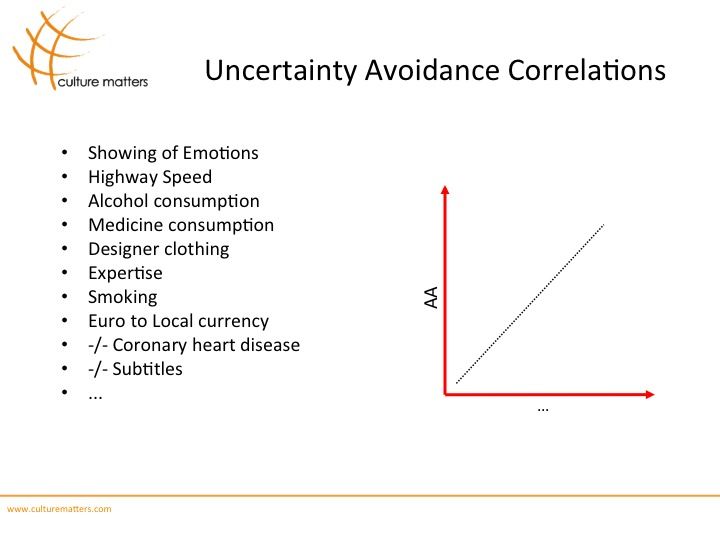 If you consider smoking, alcohol consumption, and speeding, you can see that they are all in some form or shape a way of expression one’s emotions. The point here is that “showing of emotions” does not mean that people scream and shout all the time or go about live crying all the time. There are different ways of expressing your emotions.

I can think of more examples of uncertainty avoidance and the challenge here is for you to decide which way they correlate: positive or negative:

See the Scores of All Countries on Uncertainty Avoidance Index.

I hope that with these examples of uncertainty avoidance this dimension has become a bit clearer.

If you’re interested in seeing an overview of all the countries in the world and their respective score on this dimension, go here.