So, What is Uncertainty Avoidance?

In this article I will address the following points:

From all of Professor Hofstede’s cultural dimensions, I find uncertainty avoidance the most difficult one to explain.

The reason for this is that most people seem to associate this fourth of Hofstede’s cultural dimensions with only formal rules and not with the many more informal rules that a society has.

But before we continue let’s start with a definition. For this, where else to go for that other than Wikipedia?

What is Uncertainty Avoidance?

“In cross-cultural psychology, uncertainty avoidance is a society’s tolerance for uncertainty and ambiguity. It reflects the extent to which members of a society try to cope with anxiety by minimizing uncertainty.”

However, to a lot of people, the above is just an academic definition. For that reason, when it comes to Hofstede’s cultural dimensions, the other three are easier and better defined (I’m talking about Power Distance, Individualism, and Masculinity).

Given this, here is my own take on how to explain this using easier language:

There’s a saying that says: there are only two things in life certain: Death & Taxes.

About the rest, we’re not sure.

Therefore there are some countries that look at this and say: “fine, that’s all I need to know; I’ll cross that bridge when I’ll come to it.” Because of this attitude, these countries will score relatively low on this dimension.

On the other hand, there are also countries that say: “if the only things certain in life are death and taxes, I need more predictability. I want to know what is around the curve“. These countries will score relatively high on this cultural dimension.

There are three major problems with this dimension. These add to the complexity of really understanding this.

Italy, Greece, and Spain all have a relatively high uncertainty avoidance score.

What they see is that Mediterranean countries are somewhat chaotic. So, the perception of someone from the West is that if a country is chaotic, then their score cannot be high uncertainty avoidance.

In other words, if the perception of someone from the West is that the “other” country is chaotic and/or not very organized, they will interpret that as being a low-scoring country. Or: It’s chaotic and unorganized, so there must be few rules, right?

But the opposite is often true. Countries that may look disorganized from the outside usually do (!) have a lot of rules. Cultures that score high on uncertainty avoidance often have so many rules that people do not know what rules to stick to (because there are so many). So they pick and choose the rules that make the most sense to them at that moment. And just to make sure, I’m talking about official rules only here.

Below are some high uncertainty avoidance characteristics.

You can see that it says “Structure, rules, expertise” under high uncertainty avoidance cultures. In short, cultures with a relatively high score on this dimension do have a lot of rules and regulations. But… they don’t always stick to those rules (depending on other cultural factors).

Some low uncertainty avoidance characteristics are mentioned below:

If you’re only interested in getting some uncertainty avoidance examples, make sure to read this article (opens in a new window).

To Risk or Not to Risk?

Low uncertainty avoidance cultures are generally higher risk takers than high-scoring countries. Examples are the credit crisis that started in the US (a relatively low-scoring country). Versus Belgium a (very) high-scoring culture where the level of risk involved in mortgages is pretty much zero.

I hope that with this explanation of what is uncertainty avoidance, I was able to shed some light on the most difficult cultural dimension of Hofstede.

Want to Know More? Get the Book 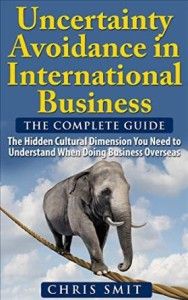 If you want to read more on this very difficult cultural dimension and what influence it has on doing business internationally, why not get the book? It’s titled “Uncertainty Avoidance in International Business: The Hidden Cultural Dimension You Need to Understand When Doing Business Overseas“ The book covers:

Do you have questions about what is uncertainty avoidance or anything about culture? Let us know in the comments section below.