Where is Culture? A Focus Point

During our Cultural Awareness Training, we focus on Where Culture Is.

In other words, can we isolate culture and distinguish it from Personality and what is Common to All ManKind?

The answer is yes.

Culture has a place amongst the other two (Personality and What is Common to All ManKind). To make it a bit clearer, let’s put it in a picture (see below): 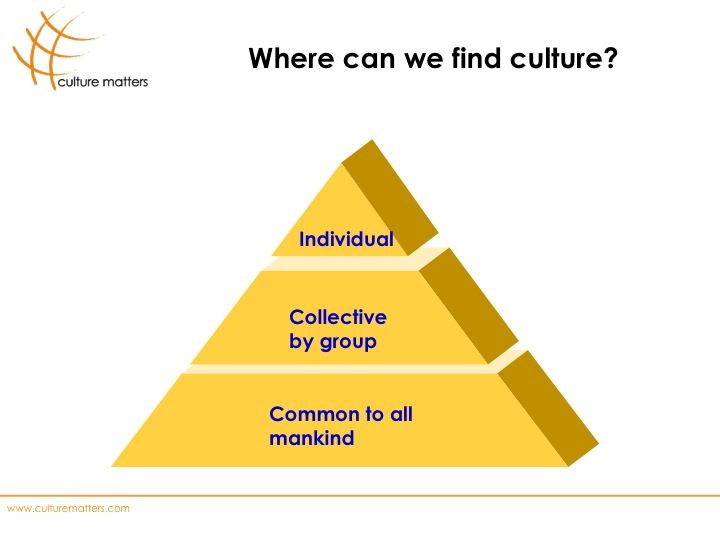 At the very top, you see the Individual.

First and foremost, people from all cultures should be acknowledged for their personalities. Not for their cultural background or “Cultural Programming“. The Individual has his or her personality first and second this same person has a culture of his or her own.

Common to all Mankind

This one is at the very bottom of the picture. There are things we all do. Irrespective of our cultural background. Examples are eating, drinking, sleeping, etc. These are pretty much identical to Maslow’s hierarchy of needs. But there are plenty more: we all engage in relationships, be it friendly or more intimate; we all aspire to a purpose in life; we all have some sort of favorite time-pass (movies, music, or whatever). However, how we practice all of the above depends greatly on our cultural background.

The same holds true for Organizations. All organizations (worldwide) have the following 4 things in common:

But how do these four points pan out in different countries, depending on the country, and hence on the culture?

All these above-mentioned Generalities get their specifics in the middle layer, the collectivity by the group (not to be confused with Collectivism!) called Culture.

A typical example is food and eating. Take the Dutch. What is a typical Dutch lunch? The general answer to this question is: “A cheese sandwich and a glass of Milk“. Now take the French. What does a typical business lunch look like in Paris? The typical answer is: “It takes at least 1 1/2 hours; has a three-course meal; and there are two bottles of wine, one red and one white“.

Is this always the case in Paris? No, of course not. The same holds true for the Dutch. But we’re describing general trends in society here.

On the surface, it is quite easy to see what the differences are, and most Dutch and French will confirm that the above-mentioned examples describe the average (daily) situation. But there is more…

If you ask the Dutch “Why” they eat this simple sandwich lunch (don’t forget the Milk!), the general answer is that it is Efficient and quick. Even almost biological: if you don’t eat, you’ll get hungry. So better eat. Even if it is something simple.

If you ask the French “Why” they indulge (?) in long lunches with wine and a hot meal, the answer is that it is a moment to relax, and build relationships. But also to do the actual business to be conducted.

We can see in this example that there are two levels of Cultural Differences. One at the observable, visible level, but, maybe more critical, at a deeper, motivational level too.

Read this article to get a good definition of what culture is.

What are your examples? Please share them by describing them here below.