The Brexit Chaos Explained. Britain Does Exactly What it Should Do.

Some of the key takeaways from this article are:

Cultural Differences Between the UK and Other European Countries

In order to put the cultural difference in a meaningful perspective, it makes sense to look at how Britain scores on the first four primary dimensions of culture:

Looking at this table you can see the following significant differences between these European countries:

France jumps out with its significantly higher score on this dimension compared to other countries.

With respect to the Brexit chaos, you can see that Prime Minister Boris Johnson didn’t get away with simply sending parliament home for a long time so he could force a no-deal ending to the British ordeal and parliament could not oppose him. Several MP’s have gone to court to stop Mr. Johnson; Brits will not tolerate being ruled with authority like this (while this could work in France; there the President is inpunable during his presidential term).

This self-correcting mechanism is typical for countries that score low on this dimension.

Even though there are differences across the board in this dimension, all four countries score individualistic. People go for their own agenda first, not for the agenda of the group.

Don’t confuse this with the fact that many individuals can have the same “agenda“, making it appear as if they are collectivistic. In the Brexit chaos leave-or-stay camps, there are many individuals who have similar “agendas“.

Theresa May as well as Boris Johnson promised they would “get the deal done“. In other words: achieve the goal. Only Germany scores comparable to the UK. However, the Germans would need a plan to get the deal done. And as we all too well know, the Brits don’t; which has led to the current Brexit chaos.

The fact that the Germans need a plan to get things done (“ordnung muss sein“) comes from this last dimension, predictability.

The higher the score, the more rules & structure are needed (France has so many rules that, from the outside, it looks chaotic again; read about doing business with France here).

And this is what the rest of Europe doesn’t understand: Why did the Brits not have a plan in place before they decided to leave?

Well, according to the British cultural profile (see table above) they don’t need one (score on predictability 36). As the Vice-President of the European Commission, Frans Timmermans, said “it’s like Lance Corporal Jones: ‘Don’t panic’ and then running around like idiots“.

It’s obvious where he’s coming from. Even the Dutch (and France & Germany) would have made some sort of plan before exiting the EU.

So, from a cultural perspective, the Brits are acting perfectly normal. Nothing strange going on. Or to put it in different words, right after the leave group won this Brexit chaos was predictable. 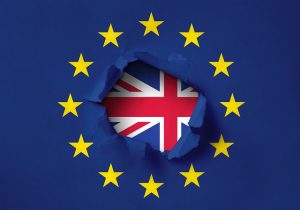 Even though the Brits are doing (culturally) exactly what they should do, the damage to their business is definitely real. Here’s a quote from The Independent website:

Declining manufacturing growth; £44bn-worth of transactions in jeaopardy every day and retailers chiming in to say prices of some foods could rise by 45 per cent, to say it’s looking dicey out there is putting it mildly.

Many UK companies leaving the UK, go to the Netherlands. The business climate together with the business-friendly tax system seems to be very attractive for them. This also coincides with the fact that the Dutch score right in the middle of the Predictability dimension.

Below is a list of companies leaving, cutting jobs, moving assets out of the UK, or will otherwise be negatively impacted by a no-deal Brexit:

This list is enormous and only lists the bigger companies. No doubt there will be many companies who would like to invest in the UK, but don’t do so at this moment because of the uncertain situation.

So it’s there, Brexit without a deal. The no-deal scenario became a reality. What will B-Day +1 look like? Here are some ideas of hopefully unlikely scenarios:

The Brexit Chaos is Only a UK Affair

Of  course that is not 100% true. Having said that, it seems to be the only thing on the mind of the Britons at this moment. While the rest of Europe has other things to worry about and to deal with, This Brexit chaos is bad for the UK and it’s international reputation.

It’s costing jobs, money, and more. The interesting thing is, however, that the Brits scold at their previous and current government, but do not seem to be worried too much about the situation. And scolding your goverment and not being worried about the future (because of the low score on Predictibility) are two very different things.

How to summarize the current chaos? Well, let’s try:

From a cultural standpoint the Brits are doing nothing strange, funny, or weird; they are perfectly following their cultural profile.

Brexit is real. And so are the negative business and financial repercussions for the UK and to a lesser extent to the rest of Europe and the World.

The scenarios of a no-deal Brexit are horrendous.

Brexit is predominantly a UK affair and to a much lesser extent a European affair.

Eventually, in the end, it will be alright. And when it’s not alright, it’s not the end yet.

Read here an article on Brexit and business in the UK.