What is International Management?

From an Organizational Psychological standpoint, one could argue that to get the most out of the people you manage, you manage them according to the way they want to be managed. This may sound like common sense but is certainly not common practice. Typically not when working with different cultures.

Most managers manage “using” their personal style, personality and not to forget their own culture. In a mono-cultural setting, culture does not play a role, since all people (including management) belong to the same culture. However, in a multi-cultural setting culture plays a crucial role. The way people are managed influences several aspects:

Typically when the (work) pressure goes up, people have a tendency to revert back to their own “default” cultural behavior.

Mr. André Laurent (INSEAD) has done some really interesting research on this subject. Have a look at the table below. 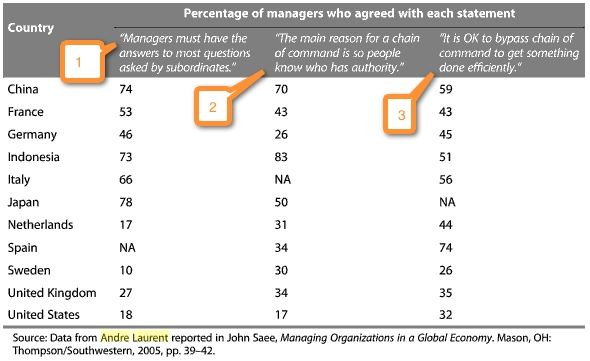 “Managers must have the answers to most questions asked by subordinates“, followed by a number of countries, with percentages of managers in agreement with the statement.

Let’s compare China with Sweden. China has 74% of the managers in agreement; Sweden has 10% in agreement.

What does it mean?

In Sweden, if a manager does not know the answer to a question, (s)he can “easily” say “I don’t know”, and the person asking the question will not mind.

In China, the expectation of subordinates is much different than in Sweden. Subordinates being sent away with an “I don’t know” answer will quickly lose trust in their manager. Their manager is just not credible because as a manager you should “know“.

“The main reason for a chain of command is so people know who has authority.” Again, looking at China & Sweden, you can see the same trend. China scores relatively high on Hofstede’s dimension Power Distance, while Sweden scores on the low end. Which is a good explanation for the differences between these two countries. In higher-scoring countries (e.g. China) you want to see who is in control: the Boss. While in Sweden (low score on Power Distance), who is in control is much less important.

“It’s OK to bypass the chain of command to get something done efficiently.” Here you can see the opposite. In China, people feel it is OK to bypass the chain of command. The reason for this is, from a subordinate’s point of view, the boss is not always right. And to get things done, you need to do them either yourself or get them done through a back door.

While in Sweden, subordinates are not as likely to break the chain of command. Typically they don’t have to because they have delegated authority anyways. And if they don’t, well… you just do what your boss tells you to do (at his or her risk, not yours).

What is crucial to understand here (going back to something said already) is that people want to be managed the way they want (or rather expect) to be managed. If you’re a Swede, working in China, you better know all the answers that you’re asked. If you’re Chinese, managing in Sweden, you don’t need to know everything. Plus as a Chinese manager, it makes sense to give your subordinates a greater (greater than in China) range of freedom and delegated authority.

What is your experience when managing other Cultures?

An infographic on organizational culture can be found here.

Want to know what a diversity manager can do for you, read this article.

An article about doing business in Scandinavia can be found here.

Interested to read more on diversity training? Read this article.