This writing is an attempt to explain, from a cultural point of view, why Democracy is not a World Universal “thing“.

Democratic elections in Pakistan, Russia, Afghanistan, and Burma? The list is far from complete.

In the western world, we seem to be obsessed with spreading our Democracy. We deploy peace missions and other diplomatic initiatives to spread our Western contemporary “religion“.
My point here is, that that will not work. Here’s why not.

In actual fact, Democracy boils down to this: The ability/possibility for One man to cast his/her One vote.

What is (Western) Democracy?

Without trying to come up with a suitable definition or one pulled from Wikipedia, I’d like to keep it simple and view Democracy from a Cultural point of view.

In actual fact, Democracy boils down to this: The ability/possibility for One man to cast his/her One vote.
In addition what is important here is that this one man is not coerced, forced, or otherwise manipulated by anyone else in determining his/her One vote (in the broader sense of the word this is called Vote Rigging).

So fundamentally our (view and practice of) Western Democracy hinges on Individuals voting for themselves.
The word “Individuals” is important here. It emphasizes, again, One man, One vote. 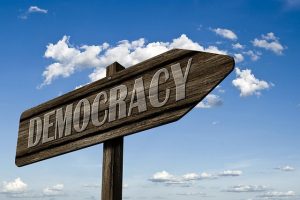 Prof. Hofstede came up with 4 dimensions defining national culture (describing general trends in societies). One of these dimensions is called Individualism (the others are Hierarchy, Goal Orientation, and Predictability).

This Individualism is crucial to making (Western) Democracy work. Because Hofstede’s dimension Individualism answers the question: “to whom are you loyal?”. On the two extremes of this dimension there are two answers possible: “my loyalty lies with me first” (= highly Individualistic) versus “my loyalty lies with the group first” (called Collectivistic). I do need to stress that individuals in Collectivistic societies do have an opinion of their own. It is just secondary to the opinion that the group holds.

High-scoring cultures on the dimension Individualism use/have a Democracy that the Western world is trying to spread so badly.

Examples of high-scoring Individualistic cultures are:

That’s it! And… that’s all! All other countries in the World (!) are Collectivistic (with a score of less than 50 on Hofstede’s dimension).

In collectivistic societies, people are loyal to their group, more than to themselves. This means (in short) that One man, One vote, translates into “I’ll vote for the One my peers (in-group) vote for“. There is nothing good or bad about either Individualism or Collectivism. It is just different.

The Danger of Spreading Democracy and Cultural Diversity Worldwide

The danger lies in the fact that the Western world thinks it can take the blueprint of its own Democracy and simply spread (or better force) it around other parts of the world. More often than not, much to resentment among the local population.

So don’t think the following countries will ever become democracies according to Western principles:

To summarize: Democracy in Iraq is an illusion. It always will be.

Ending it here with the, not so surprising, historical quote from Winston Churchill: “It has been said that democracy is the worst form of government except for all the others that have been tried.”

Don’t forget, Mr. Churchill was British, one of the most Individualistic countries in the World.

So, democracy and cultural diversity do not go hand in hand!

Listen to this podcast on the same subject of democracy and cultural diversity.

An article about the cultural component of the US elections can be found here.