Saint Nicholas of Myra has a lot to answer for. For a start he was responsible for a Nordic Council meeting that 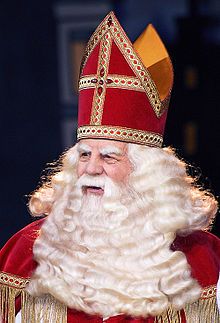 was devoted to a bitter dispute over claims to his namesake, Santa Claus.

The Norwegians presented a carefully argued but sentimental case for ownership, matched by equally nostalgic pleas from the Icelanders and the Greenlanders. The Swedes grumbled, and the Finns argued from the de facto reality of a Santa Claus industry already established just inside the Arctic Circle north of Rovaniemi.

They subsequently reinforced their claim by launching a ‘Santa Claus Finland International’ venture which, in turn, prompted the Danish government to grant a state subsidy to a Santa’s workshop in Greenland.

Norway, as always, was anxious to have the last word. The Norwegian town of Dröbak challenged (so far unsuccessfully) the Finnish claim to the Father Christmas trade on evidence, dating from the year 1602, that Santa was born under a tree there.

Recently, six weeks before Christmas, Saint Nicholas was in the news again. This time it was because he is associated in the Netherlands with a dubious character called Zwarte Piet (‘Black Peter’). As reported in the International New York Times, “poor St. Nicholas, a symbol of kindness and generosity, has become for some a source of division and, occasionally, pretty nasty behavior.” Zwarte Piet is politically incorrect, so Santa Claus gets the blame.

Rather than in the Netherlands or one of the Nordic countries, Saint Nicholas was born in Patara, in southern Anatolia and close to Myrna where he had his bishopric. That area of the world also has other links with Christmas: the original birds to provide Europeans with Xmas fare came here through the initiative of enterprising merchants from… Turkey!

… and the Garden Gnomes?

Saint Nicholas is also indirectly, but falsely, associated with another historical phenomenon, the European Garden Gnome (EGG). This character, shrouded in the mists of history, seems to owe his or her origins – like Saint Nicholas – to the Turkey of the first millennium when reports of gnome-like creatures in the copper mines of Anatolia started to spread to the West.

From the copper mines of Turkey they first emigrated to the salt mines of Poland. An American traveller, Bayard Taylor, visited the Wieliczka mine in 1850 and left an account of his visit. In it he talks of “vaults where a lot of gnomes, naked to the hips, were busy with pick, mallet, and wedge, blocking out and separating the solid pavement.” This, in the days before American political correctness, may have been a reference to the modest height of the Polish mineworkers. They would now be called ‘vertically challenged Poles’.

Whether the story of garden gnomes migrating from Anatolia to Poland is true or not, I don’t know. But what followed, much later, was an invasion of garden gnomes across Europe. In Italy they emerged in the early-1600s as porcelain Gobbi; in Switzerland, notably around the town of Brienz, as wooden carvings; in Germany, in the mid-1800s in Dresden and Thuringia, as ceramic figurines.

In This Day And Age

Today, there is a thriving export trade from Poland, which has German garden gnome suppliers up in arms. But there does seem to be a historical connection with mining (remember the gemstone mines in Walt Disney’s Snow White and the Seven Dwarfs?). Until they burst onto the gardens and landscapes of Bavaria and Baden-Württemberg, gnomes definitely were an inner-earth species. According to strange sects like the Rosicrucians and the Caballists, these gnomes still live underground.

But not in Baden-Württemberg! There at a private hotel in Freiburg, in the heart of the Black Forest, you will find the biggest assembly of EGGs I have ever witnessed. Due to overcrowding in the garden, a detachment of them has found its way into the breakfast room.

Baden-Württemberg even has a garden gnome museum and shop at Rot am See. Proprietor Günter Griebel reports that his best-selling lines now include ‘Flasher Gnome’, ‘Stabbed Gnome’ and ‘Sexy Susie’. These owe nothing to Polish entrepreneurialism, as they are all made in Germany.

Though particularly favoured by Germans, the garden gnome has migrated to other European countries where it finds itself facing local competition from such things as miniature Atomia here in Belgium, Eiffel Towers in France, and just simply rubbish in Britain. One enthusiast is an English lady who has a community of 7,500 gnomes in and around her home. If nothing else, this confirms the fact that the English are the most eccentric of all the Europeans…

It seems, though, that the idea of garden gnomes inflames the imaginations of many of us. A French activist group has created a ‘liberation front’ for them, Le Front de Libération des Nains de Jardin: its members abduct them from people’s gardens, camouflage them with paint and set them free in nearby forests. Italy has MALAG, The Garden Gnome Liberation Front. In response to these onslaughts a Swiss professor has founded The International Association for the Protection of Garden Gnomes, lobbying for legislation to make ‘gnome theft’ a criminal offence. For a brief while, Britain had ‘dwarf-throwing’ as a pub-based form of sport, but this was declared illegal.

In fact the EGG species found favour in Germany because people were fed up with garden cherubs. Chief perpetrator of the garden gnome cult there was Günter Griebel’s great-grandfather. Sensing that cherubs had had their day, he started replicating figures of old men in miner’s outfits that progressively mutated into EGGs. So there may be something in the ‘mines in Anatolia’ story after all…

Poles, who seem to have been the first Europeans to welcome gnomes, do not particularly approve of them, except as a source of foreign exchange. “Polish people do not buy garden gnomes,” say the proprietors of P W Westimex of Nowa Sol, the biggest Polish exporters of the species and the proud owners of the largest garden gnome in the world (5.41 metres high). “They prefer to spend their money on food.” Sensible people, the Poles.