In this article I will address the following topics about masculinity and femininity:

Definition of Masculinity and Femininity

Let’s first start with a definition of masculinity and femininity:

If you do a search on the Internet for “what is masculinity and femininity” there are of course thousands of results. However, most of these results consider the gender association that is so often made when you talk about this cultural dimension.

What’s Wrong With Masculinity and Femininity?

The main problem lies in the association that many people have or make when they hear these two words; often they are immediately associated with gender; the woman man comparison. And that was never the intention.

A better name for this cultural dimension could be Process versus Goal orientation. But most academia and most of the Internet search results still focus on the initial name.

In the rest of this article, I will do the same. Just remember that you can substitute masculinity with Goal orientation and femininity with Process orientation.

In my own experience does the USA have the biggest conceptual issues with the name of this dimension.

At a certain time when I was giving a workshop in Boston MA, someone walked up to me tell me that I couldn’t use these terms because they were discriminating. Of course, that was never my intention. The solution I found was either using the words “Goal Orientation” or “Tough” for masculine cultures and “Process” or “Tender” for feminine cultures.

Examples and characteristics that define masculinity are:

To find a complete overview of all the countries and their respective score on this dimension and other cultural dimensions please go here.

Below you can find some examples and characteristics that define femininity: 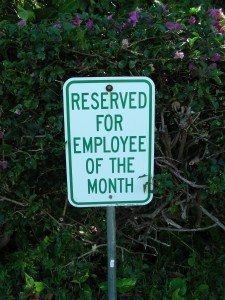 To find a complete overview of all the countries and their respective score on this dimension and other cultural dimensions please go here.

It is not totally untrue that this dimension is not related to gender differences.

It is just true that when people define masculinity or define femininity they immediately think of the gender differences.

What we need to do is compare one country with another. So if you take the highest-scoring country, Japan, and compare this with the lowest scoring country (the most feminine), Sweden, you would find that Japanese men are significantly more masculine than Swedish men. And the same holds true for women; Japanese women are significantly more masculine than Swedish women.

Another way of looking at the masculine and feminine gender examples is a phenomenon called “role overlap“. To what extent does society accept that men do what women traditionally should do and vice versa.

In feminine cultures, this role overlap is much bigger than in more masculine cultures.

Another masculine and feminine gender example can be put in a question:

“Being Employee of the Month; Is this a Reward or a Punishment?“

The answer to the above question depends a great deal on your cultural background. There are cultures that would answer with a definite YES, others with a NO (and there are the in-betweens too of course).

And in more masculine countries women as much as men are motivated by being the employee of the month. Whereas in feminine countries neither would care much about it.

Below is an image that displays how English-speaking men and women differ in the use of language that they use on social media. 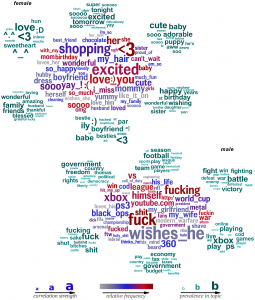 Below is an example:

An article about gender differences can be found here.

An article on how different genders use social media can be found here.

More examples of masculinity and femininity can be found here.