Is (our) Culture changing?

It depends. In absolute terms yes. If you were to look at one culture only (e.g. the Dutch) you could say and see 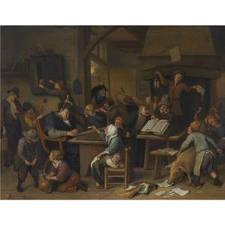 that things are changing. Typically if you ask your parents or grandparents they would almost certainly say that “things are different now, then in my time…” A closer look, however, reveals that most things change from the outside only.

Technically spoken, only on the level of symbols, or how things come across and look. Fundamentally, in terms of norms and values (the Model), things remain the same. Take a look at this painting of the famous Dutch painter Jan Steen. It shows a Dutch classroom around 1670. A Dutch student would certainly say that things have changed over time. However (s)he would also recognize certain aspects from then today!

Are we moving towards one single global Culture?

That’s a difficult question. It’s a bit like predicting the future. Most people believe we will (soon) have one common culture. We will all eat at McDonald’s, watching MTV, and paying with US dollars (well… sort of…). However, there are some indications that we, globally, are moving away, rather than towards each other.

Examples are the CNN The Clash of Civilizations and the Remaking of World Order broadcast in different languages (CNN started out in English, but soon diversified in other languages). McDonald’s adjusts its menu to local taste (McKroket in Holland, beer on the Menu in France, etc…). The Danes saying No in a referendum on the Euro.

Talks in the UK about separating from the EU. etc… Are these examples conclusive? No, not by far. A very interesting book written by Samuel Huntington, The Clash of Civilizations and the Remaking of World Order, describes the issue further.

What is a “Cultural Code of Conduct”?

In dictionary terms, it sounds something like this “A central guide and reference for users in support of day-to-day decision making. It is meant to clarify an organization’s mission, values, and principles, linking them with standards of professional conduct.“

What are Culturally Competent Actions?

Cultural competent actions (CCA) are a way of being and/or doing that, (and this is very important) given the specific circumstances and context provide the highest effectiveness (focused on the outcome) for all involved parties.

Have a Cultural Awareness Training FAQ yourself? why don’t you write to us? Click here to contact us!