In this article on how to do business in the USA, I want to focus on the specifics of the cultural makeup of 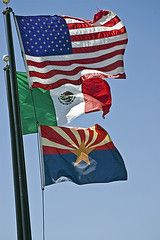 the United States. Doing business in any country requires a good understanding of not only the local etiquette but certainly of the local culture. But there is a BIG caveat when it comes to getting the best or right angle to look at a culture.

We Can’t Both Look at the Same River

I’m not sure if this is an old Chinese saying, but if it is, it sounds something like this:

“If you and I are looking at the same river, we are both seeing a different river.”

What this means is that this river is always changing (flowing) and the (literal) angle of you and I will be different when we’re looking at that river, and hence we see a different river. Wise words? I think so, and my take on this with respect to cultural differences is the following: If a Dutchman and a Chinese look at an American, they both see a different American. Why? Because the cultural frame of reference of the Dutchman and the Chinese is both different.

Having said the above, and knowing that we can only talk meaningfully about cultural differences by the grace of comparison, it will be impossible to describe the Ultimate Guide on How to do Business in the USA. Instead, I will take four dimensions of culture, and describe typical characteristics of those dimensions, and how they pan out in the US. You then take your own culture into account (you, the reader) and compare your own culture to that of the American culture. To make this relative comparison easier, I have made a handy “cheat sheet” that you can use to see the cultural differences. You can find that by clicking here. As with every culture, in the US you will also find exceptions to these guidelines. So consider this the General Trend in Society and Organizations.

The Americans score relatively low on hierarchy. This means that it is easy and accepted to disagree with your boss or go into a discussion with him or her. At times it is even expected when your boss asks you for your opinion in order to get more input to come to a better decision. Also, when something is not clear to you, it is expected that you ask for more clarification. The other side of the same medal is that your boss will probably not check up on you as will happen in countries that have a much higher score on this dimension. Some people from higher-scoring cultures get demotivated because their American boss never checks what they are doing. Now you know why.

Me Myself and I

Together with the British, the Americans are the most individualistic culture in the world. In other words the I comes first, followed at a distance by the We. The business impact of this is that tasks and “stuff to do” come first, and the so-called relationship comes second, if at all.

Typically non-American cultures can sometimes perceive American (business) culture as pretty hierarchical. The explanation for this is that Americans sort of form a “psychological contract” with their employer. In other words, from 9 to 5 the employee will “do as he is told“. But after 5 pm they are both equal again and can go and play squash together. Something that is much less (if at all) possible in countries like France or China.

The Goal Justifies Everything

Americans, and Anglo Saxons in general, are pretty goal-oriented (versus Process-oriented). “The goal justifies the means“, or “by hook or by crook” are well-known sayings. For many Americans, the adagio of “If you work hard, you can achieve anything” is still valid. In business, this means that competition amongst colleagues is generally accepted and seen as fair play. Competition is good because it brings out the best in you and me. Combine this with a very high degree of individualism, and you can understand that Americans can dance on stage telling the rest of the world how great they are.

No Guts No Glory

Taking risks is a very normal aspect of US business life. If you don’t take any risks, how can you make any progress? For many other cultures, this is not the case. Their structure, rules, and predictability are more important. The dimension is called Anxiety Avoidance and is generally difficult to understand. If you want to read more on this dimension, click here.

Collecting All Kinds of Statistics

Some people wonder why the Americans collect so many statistics and data about pretty much everything. Do they wonder that if Rules and Regulations are not that important, why collect so much data? The answer has to do with that American companies collect their statistics to either prove their product is better than the competition or to prove that their product is better than the competition (Yes, I put this twice here, on purpose). So basically, the collecting of stats is much more related to achieving the (sales, profit, turnover) goal.